/ Uncategorized / A Sad End to a Lonely Trail

This morning on my drive to work, something different caught my eye. I was driving along the five-mile stretch of dirt road between our house and the highway heading into town. Whatever it was, it hadn’t been there yesterday.

The ground was covered in a three-foot blanket of snow. National Forest bordered the road on the stretch where I was. In the distance, something large and brown was down on the ground in the clean snow. My mind said, “Elk,” although I couldn’t tell for sure from where I was. Telltale Magpies were gathered and seemed to be feeding.

I stopped the truck and studied the scene from my vantage point. Something dead for sure. But from what? Having livestock, mountain lions are always a concern. They are plentiful in our area and are frequently seen in the valley. My Anatolian Shepherd dogs do an excellent job of watching over my herd of Alpine goats, but I like to know if a lion is hanging around, so I can turn my vigilance up a notch.

I pulled the pickup off the road and shut it off. I stepped off the road and plodded out into the forest through the thigh deep snow to investigate. Soon I could see that there was no sign of a lion. No blood, no fur, no attempt to bury or hide the carcass in typical lion fashion; Just a single set of tracks in the deep snow, coming from the west, ending at the animal, a cow elk. She wasn’t lying like she’d been bedded down. It appeared she had just collapsed onto her belly and then and there she died. I pondered her footprints recorded in the snow. There was something strange and sobering about them. I was looking at the last tracks of how many thousands and thousands of miles she had traveled in this forest over how many years?

There was no sign of any thrashing around or attempts to get back on her feet. The otherwise pristine blanket of white told the story of the cow’s last moments, moving through the deep snow, alone in the bitterly cold night. Her steps seemed to be spaced close together, moving slow, but in a straight line before she dropped to the ground and breathed her last breath. Her teeth were yellowed and worn nearly to her gumline, meaning she was well up in years. I realized I knew this elk; at least I knew of her. I had seen her several times in the preceding weeks.

Elk are social animals, almost always traveling with companions. This elk had been alone, hanging around the county road since the snow got deep after the last few storms; surely because walking on the road was less of a struggle for her. A month ago there had been a herd in the valley. Sometimes the elk will winter here, but this winter there was too much snow and not enough food and the herd soon moved on, and the lone cow had been left behind.

On one occasion I came upon her walking towards me on the road in a near white-out. I stopped the truck to give her plenty of time to move off the road. She stood for several long moments looking at me. Perhaps she was dreading having to move off the road and plod once again through belly-deep snow. I took her picture. A few moments later she turned and gingerly stepped off the downhill side of the road and slowly trudged down the slope. I knew she was having a hard time and I felt sympathy for her.

I stood for a long few minutes, and my mind thought about the regal old animal’s story. I wondered when and where she was born? How far had she traveled? How many calves had she birthed? I thought of the stress she must have felt in her last weeks. She knew she was extremely vulnerable without the relative safety of her herd. She was probably alone for the first time in her life. I believe she must have also known she was dying. I felt sadness for her. Surely a hunter’s bullet or the grasp of a lion would have brought a more merciful death.

As I stood in the silence of the forest, I realized that I was witness to the literal and visible end of the trail of this magnificent creature. There was something very somber and sobering about seeing those last footprints; Evidence of life, only inches from death. I stood silently for a minute longer, now pondering the approaching end of my own trail on this earth. 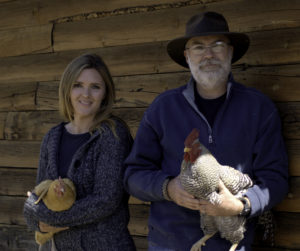 Welcome to Aprons and Acres Homestead! We invite you to join us on our journey towards a self sustainable modern homestead lifestyle. We live on five acres with goats, livestock guardian dogs, chickens, honeybees, an orchard and organic gardens. You will find our favorite recipes and information on wood stove cooking. We are also renovating a fixer upper, and sharing our progress. Thanks for stopping by!